Imagine, for a moment, you woke up in the middle of a dark forest, near a lighthouse on a cliff, overlooking your home town. It’s raining heavily and the only sense of safety or life near you is the lighthouse not too far away. You have absolutely no idea how you got there and as you maneuver toward it, through the tall pine trees, there’s a tornado spiraling violently above the ocean that’s separating you from the town. Suddenly, you’re awake in your photography class and realize it was only a dream. In the next moment, you’re in the bathroom and intervene just as a fellow student is shot, and suddenly, you’re right back in your class, as if it were a vision or premonition. You are Max Caulfield and you have the ability to control time.

Life is Strange is a charming, choice-and-consequence inspired experience from Dontnod Entertainment, the same development company who gave us Remember Me two years ago. Life is Strange is an episodic adventure, chronicling the life of a young, artistic teenager in a prestigious Oregon high school, living a not-so-prestigious life as she discovers a sudden ability to rewind events as they happen. From the beginning of Chrysalis, the first episode in the saga, the narrative is immediately almost completely relatable; daydreaming in high school, highbrow social cliques, dependence on social media and trying to understand the world around you and figure out your place in it—it’s all very adolescent, isn’t it? But it certainly rings a few bells. The concepts and themes covered in the game – from archetypal classmates to modern pop culture – are concepts and themes we’ve all experienced at some point and in one way or another. However, that is not the central focus of the game, but instead, the stage upon which the story is performed.

Max Caulfield is a terribly likeable person right off the bat. We’re introduced to her as an introverted and rather unremarkable budding photographer as a whole, but one with a good head on her shoulders, an artistic vision and an idol of positive energy as she tries to make her way through her final year of high school. Within the first episode, by way of choice and consequence, Max displays herself as a strong, intelligent girl who defies the stereotype hoisted upon her by modern societal culture. The story pursues this further, demonstrating her qualities and abilities by pitting her against challenges that she can shape and manipulate as she desires. Of course, as if adolescent life wasn’t hard enough, now she’s tasked with handling and understanding her ability to rewind time and alter the past to shape the future. Pair that with a missing girl in the fictional town of Arcadia Bay, a paranoid and antagonistic ex-solider/school security guard and a town full of rich kids with more secrets than money. It’s all very Veronica Mars-esque, isn’t it? That’s what appealed to me the most in Life is Strange.

Aside from Veronica Mars, the experience is easily comparable to the episodic Walking Dead from Telltale Games, for all the right reasons. It presents the player with scenarios and dilemmas, guided by a focus on choice and consequence, and with nearly every choice you make, seemingly insignificant or otherwise, prompts a little overhead display, informing you that that choice will have a consequence. It truly leaves you wondering what on Earth it could possibly be. Nearly all of your choices, both banal and purposeful, can be undone and remade as you desire, crafting and shaping a new, different future. It’s a great system that not only adds an innovative flair, but allows you to consider what may happen, experience the outcome and change it if you don’t like it. One might think that takes away from the replay value since you can experience every decision in one playthrough, but Life is Strange cleverly includes a point of no return.

Max’s ability to rewind time isn’t explained or detailed yet, but her abilities are slightly limited and even she questions why. She can see short-term results of her actions and choices, but don’t expect to be able to go change something ages ago; once Max commits to a decision, there’s no going back, narratively. It somewhat contradicts the point of time travel, but if we kept going back and forth, we wouldn’t make any true progress. For example, if she makes a key choice in school and leaves the building to go on campus, that’s considered a point of no return and any previous decisions cannot be undone. Either way, it’s an ability I’m sure a lot of people wish they had growing up and perhaps even now.

Without giving too much away, Episode 1 – Chrysalis, serves as a pilot, if you will, an introductory episode with a-whole-lotta bang for your buck. We meet our protagonist, we understand her surroundings, we experience her newfound power and we learn about what’s going on behind the scenes in the town of Arcadia Bay. The main story so far appears to revolve around Max and her ability to rewind time, with a couple of side stories that will unfold and take precedence at some time in the near future. We meet the characters, we learn some secrets and we get involved in the lives of others. It’s a really strong introduction that packs in a lot of information. With so much content, so many characters and a lot of currently unanswered questions, I find it hard to believe that everything that could possibly be touched on will be in only five episodes. Unless, of course, Dontnod Entertainment follows in Telltale Games’ footsteps and creates a ‘season two,’ which, if done correctly, will be utterly brilliant. 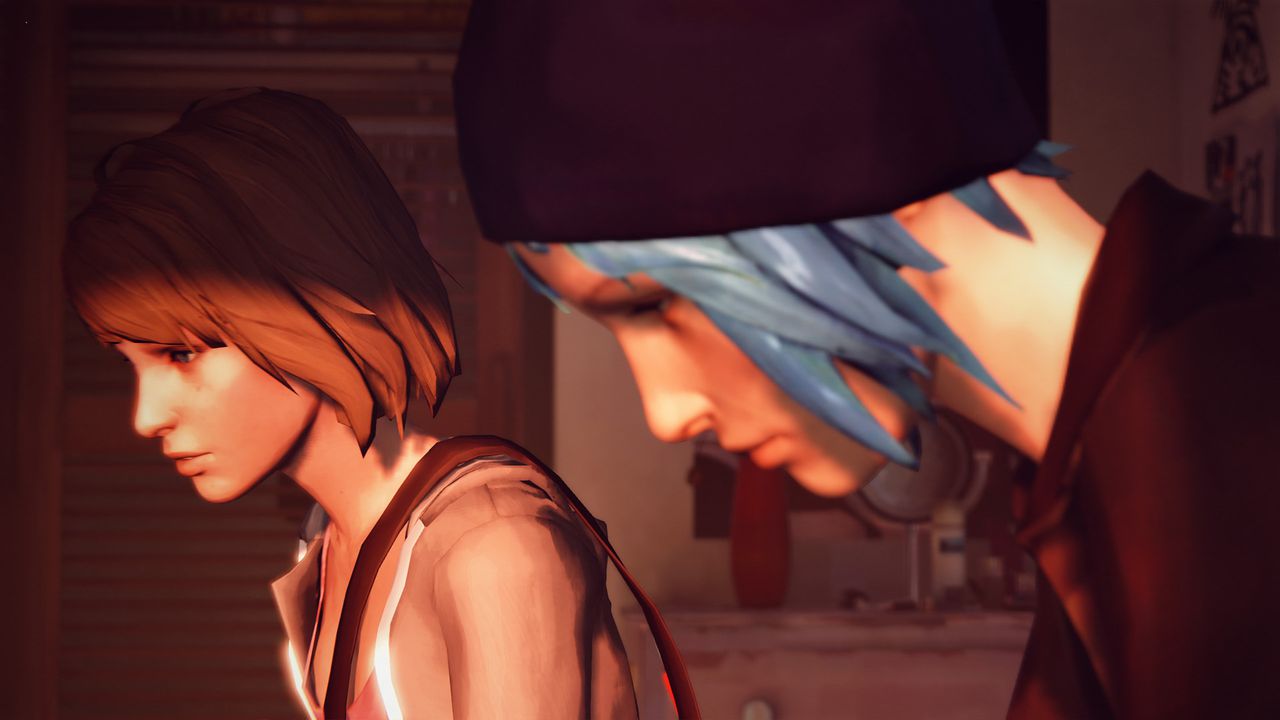 Life is Strange truly shines in its artistic style and modern indie themes. With Max being a relatable yet not-so-typical teenager and a budding professional photographer, there’s a lot of modern artistic references, obscure indie-hipster music and themes, as well as dialogue, one-liners and references suitable for a young adult film lead starring Ellen Page. It’s really quite wonderful, to be honest. The game, visually, is gorgeous and the art style is truly unique – I believe everything is hand painted – but there are some graphical concerns and while it’s undeniably beautiful, one can understandably expect a little more detail, texture and even bump mapping with today’s technology. Unless, of course, that was the artistic vision and ‘point,’ in which case, right on. A strong criticism I have, however, is the lip synchronization on characters. With close observation, it doesn’t seem like the characters’ mouths are matching their dialogue at all and are instead just moving to…well, move. It’s not a big issue, but it does take a small piece negatively from the overall experience.

The true and unfortunate downside to Life is Strange is the dialogue and voice acting. For a game that’s so heavily inspired and stressful on artistic style, the script writing and voice acting need a bit of dedication and improvement. Max, in my opinion, is the only character that manages to have at least halfway decent dialogue and slightly better voice acting than the supporting cast underneath her. With essential characters in key situations spewing out rather droll and awkward dialogue paired with surprising lack of emotion in some characters – without spoiling anything – it really takes away from the experience. With a game whose narrative is the spearhead of the whole project, the poor dialogue and voice work really nulls and voids the effort put forth.

Life is Strange is truly a unique experience that chronicles a not-so-average young girl with an ability that can be used for both good and evil. It’s a charming gem that suffers from an unfortunate weak point that can easily be rectified, bringing this game right up to the bar it intends to raise in terms of storytelling, artistic style and setting a standard for choice-and-consequence gameplay.

Star Wars: Battlefront Will Be Playable ‘First on Xbox One’

Video game enthusiast, James Bond aficionado, Tomb Raider expert, and lover of Beefeater gin. I'm a creature of habit and I'm either found buried in a book or working through my video game backlog when I'm not working my day job.

Everything we know about Luigi’s Mansion 3.

Could Sega Release Madou Monogatari in the West?

Will Nintendo Release an M-Rated Fire Emblem Title Next?

#StopEAAbuse — The Movement Calling for Change in The Sims

Fire Emblem: Three Houses Review The illustrious Fire Emblem series has received a string of success with 3DS games and...

Trials of Mana Seiken Densetsu 3 was an SNES title originally released exclusively for Japan. As the sequel to Secret...